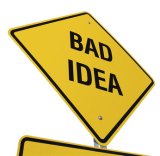 (Disclaimer: This post is not about the multiple debt ceiling proposals making their way around Washington. But it might as well be.)

OK, PR people in the room: how many times have you been asked to come up with creative ideas to address a problem, presented a list of your top 10 to the client, and had every idea shot down?

We’ve all been in that chair at one point or another. It makes you want to throw up your hands and quit. Obviously, that’s not an option.

Aside from the specifics that can make a great creative idea something no one would ever try, we PR folk are constantly having to seek out ways to avoid ending up in “Dead Ends-ville;” that is, a place where no idea makes it beyond the brainstorm because no one wants to take it out for a spin.

When I’m working with clients, I try to outline my sometimes (OK, often) crazy ideas as clearly as possible, with the goals and proposed tactics clearly outlined. By illustrating exactly where the plan takes us, we communicate why it makes sense to try it.

My steps, in a nutshell:

1. Identify the goals
2. Brainstorm the possibilities
3. Outline the path
4. Illustrate the endgame
5. Ask when we get started

The wildcard here is that some ideas are so wild and crazy they can require a leap of faith. And as the title of this post says, if you are too afraid or paranoid of failure to take a chance, you’ll never get anywhere.

And while we don’t get paid to take risks with our clients’ businesses and reputations, we do get paid to be trusted. We only earn that trust over time, and we can destroy it with a single bad (or stupid) call.

A client that trusts you will be more willing to take you up on that crazy idea, so long as they know there’s some kind of safety net to save them from the flaming swords and black hole of death. But don’t go out on that limb if you don’t think the relationship isn’t strong enough.

In the end, the best plans are ones that make people feel safe and confident. So start drawing up those strategies to go with your ideas and pitch a winner!